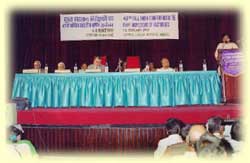 The statistical cell under the division collects and compiles accident statistics and other information related to the administration of the Factories Act and Rules framed thereunder. This information base is used in planning and implementation of national policie concerning occupational safety and health as well as preparing replies to the various Parliament questions.

The Construction Safety division undertakes activities like collection of data related to manpower, accidents and dangerous occurrences in the construction sector of the country and training of managerial and supervisory personnel at the national and international levels with the assistance of international agencies, workers' and employers' associations.